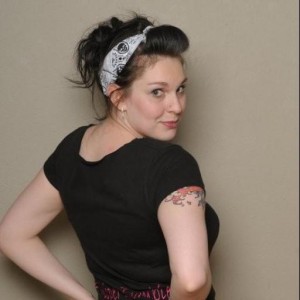 Recently, photographer Justina Villanueva and a group of colleagues put together a top 50 list of the best-looking men in metal. When we at HearEvil saw it, we decided that it would be a great bonding experience for us and all our n00bs to objectify the hell out of some dudes too! Today we begin our five-part series of the 45 (because we’re choosier) hottest guys in metal. Some of us ranked our choices, some of us didn’t, some of us picked a few of the same fellas (great minds think alike, after all) — we’re all unique, but we all love our metal eye candy! Let’s get this show on the road with Ashley the Heavy Metal Momma’s Picks!

When I was asked to make this list I thought I was fully set on who I would pick until I started writing my list. I realized two of the men on the list are no longer with us (RIP) and a couple others are from the 90’s grunge era. I decided to leave those few off the list and keep it straight metal. Another dilemma I had was trying to explain why I found them hot. Every bone in my body wanted me to start writing duuhhh HOT and then air hump everything. So I will try, key word try, to keep my pants on and not set off any fire alarms with my rising temperature.  Here we go…..

The Beard, The Hair, The voice, everything about this man is a reason he is making my list. Every time I watch him play I start smiling like a dumb dumb 14 year old girl who has a pathetic crush on him.

I’m not usually one to swoon over drummers but whenever he starts banging on those drums, my heart starts skipping a beat literally. The talent Tomas exudes is really a treat to my ears and his beard is a treat for my eyes.

Ok so I may have lied saying I’m not really into drummers since there is this guy on my list. His way with words, the lyrics he writes speaks to my heart and I always find myself forgetting I live on planet earth for a while. I suppose he’s a good drummer as well.

I’ve had the pleasure of seeing Whitechapel live and let me tell you I get all giddy inside. Maybe that’s because of the extreme vibration in the room that makes my pants tickle me, but Alex is cray cray adorbs. His clean cut style mixed with the heavy music really gets my tongue wagging.

The many times I have seen this band live; I believe I’ve spent the entire show eyeballing him. His animated stage presence is really a show on its own. Nicks sense of humor carries through to his YouTube videos where he breaks down some songs and shows you how to play them. Funny men will always make their way into my heart.

Say what you will about a man who wears makeup, but he has had me smitten since I was 16. The teenage Goth that still lives inside me screams “omg he is so hot” every single time I watch a COF video or live show. What’s a girl gotta do to become your Nymphetamine girl Dani?

Do I really need to explain my reasoning behind this one? Every time he sings my body is hurled into a sexual euphoric coma that I never want to awake from.

Alex is probably the nicest man in the industry that I’ve ever had the pleasure of meeting. Talking to him made me feel like we were old friends. His crazy bass playing mixed with the sweet and sexy lyrics he writes for the band that reek of sodomy and murder gets me into a come hither mood.

The infamous Adam D aka Princess Man is almost a tie for first place. The musical genius behind this man shows me that he has brains and being smart is sexy ladies. The connection he makes with the audience is also a heart stealer for me. FLEX PARTY

And so here we are pants still on, maybe a little sweaty…my number one Hottest Man in Metal goes to….

Mikael has been on the top of my list since forever really. The way he switches from clean vocals to the deepest deathly growls effortlessly makes me fall to my knees and pray for mercy…or that he will take me in that dark corner and have ummm fun. Yes fun.