Our photographer on her top shows!
Author 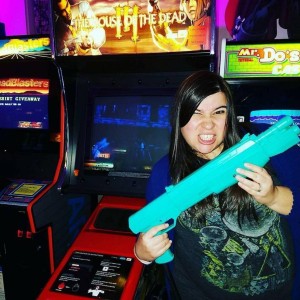 Concert photographing wife/mom/metalhead/caffeine lover/booze hound/snack aficionado in NJ. If you are all or any of these things, we'll be instant friends. Always looking to make photographer and music loving friends, too!

I know this isn’t a metal show, but it was still fun. The Used performed their self-titled album and brought back a slew of happy college radio memories. Bonus: The New Regime opened! This Ilan Rubin of Nine Inch Nails and provides proof that he does way more than play drums. Rubin was also cool enough to hang out at the merch booth and talk to fans (like myself, who was completely enamored to be in his presence as a giant NIN fan), which made the night that much more memorable.

Although Leprous headlined, Earthside was the band that truly blew me away. It was their first NYC performance and they gave everything to the crowd. Every song they played took me to another world (like all good proggy songs should)! Give their latest album (A Dream in Static) a spin. I’m partial to the track “Mob Mentality” because it’s so grandiose and features Lajon of Sevendust.

One of those shows that I never wanted to end. The crowd was so into it that the floors were moving. Mind you, this wasn’t at some dinky/poorly constructed venue … it was the famous Webster Hall in NYC. The GRAND ballroom area (AKA, the nicest/largest venue space there)! The crowd was also filled with so many friendly people that stuck up conversations with me in-between sets. Gotta love the camaraderie!

I’ve probably seen the Deftones over a dozen times since Around the Fur came out. Deftones never disappoint, and they brought a solid set to RiotFest (a three-day music festival held in Chicago every year). Some sets didn’t resonate with me at the fest because of the space, but the Deftones totally crushed it. They played a great set (lots of variety) as the sun began to set on the last day of RiotFest. Perfection!

Another non-metal show, but one of my favorites of 2016. VNV Nation is a darkwave group from Ireland and England. It’s two guys that make a whole hell of a lot of noise and have really uplifting lyrics. Basically, you can stomp around to the beats and cry from the touching lyrics all at the same time. This show was particularly special because it was one of their few Compendium sets that were performed in select U.S. cities. Three hours of non-stop VNV Nation music from all of their albums throughout the past 20-plus years. Any fan would appreciate that from any artist!

The original Misfits reunited to headline the last night of RiotFest, and it was nuts. Although I’m from New Jersey, I didn’t grow up listening to The Misfits, and I don’t know their entire catalog. I went into this set with a pretty limited knowledge of their discography but knew every single song they belted out to the crowd. Speaking of the crowd, every single person was singing along with one another and lively circle pits were all over the place. It was organized and friendly chaos abound. I highly doubt this reunion will happen ever again in the US, so this is definitely one for my top 10.

My final “best of” from RiotFest goes to Refused, who were probably the biggest surprise for me over the three days. I knew onesong (“New Noise”) but heard they put on crazy shows. I had a plan to sneak out to see 3Teeth in the middle of their set but couldn’t turn away. These dudes were fucking electric. I was really into everything they performed (especially when they closed with “New Noise”) and got seriously choked up during their vocalist’s call for more female artists at fests.

I had the privilege of seeing Killswitch Engage four times in one week during their New York City takeover in March at very intimate venues. I also always wanted to celebrate my birthday at a concert and finally got to live out that little dream of mine at this show with my husband and various loved ones. We had perfect spots on the balcony so we could watch the chaos from above, (I had to save my poor body for three more shows that week, so give me a break!) and hear the songs perfectly. Bonus: New York’s own Candiria opened!

I fell madly in love with Chelsea Wolfe one night when I got home from work. My husband had her video for “Feral Love” queued up and told me that I needed to watch/listen. I was immediately captivated and devoured her entire discography immediately. Next time she toured, I immediately grabbed tickets for her show at the legendary Stone Pony in Asbury Park. It was an uncommonly cold and rainy night in May, which only made her set that much more incredible. Every single song she performed sent vibrations through my entire body. The whole venue buzzed with misery. Bonus: I got to chat with Wolfe really quickly after her set to tell her how amazing her music is and how I envy her black eyeshadow skills.

1. Killswitch Engage (St. Vitus, Brooklyn, New York City)
Nothing beats seeing a huge band in a tiny venue, which is why this was easily the best show of the year for me. St. Vitus has a capacity of 350 and I was smushed right up against the pretty non-existent stage in front of Adam Dutkiewicz all night. Jesse Leach and I even screamed in each other faces a few times during some choice songs, too. Sharing moments like that with artists I admire and truly feeling that energy all night from everyone so up close was epic. It also reminded me of shows I used to go to way back when before phones and other distractions got in the way of having a good time. Everyone kept their phones locked away to truly enjoy this one-in-a-lifetime set, and it made the night that much more enjoyable.